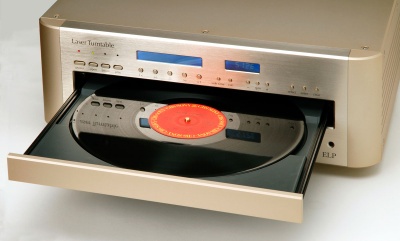 A laser turntable is a phonograph that plays gramophone records using a laser beam as the pickup instead of a conventional diamond-tipped stylus. This playback system has the unique advantage of avoiding physical contact with the record during playback; instead, a focused beam of light traces the signal undulations in the vinyl, with zero friction, mass and record wear. Vinyl LPs played with a laser playback system can theoretically "last forever" as there is no deterioration caused by passing a stylus through the grooves.

Current laser turntables can play most varieties of phonograph records (45s, 33.3 LPs, or 78s), and play them with high fidelity. Although quite expensive, they are favored by the record libraries and radio stations for archival use and transcription to digital media.

The laser turntable was first conceived by Robert S. Reis, a graduate student at Stanford University (his master's thesis was "An Optical Turntable"). In 1983 Reis and fellow Stanford engineer Robert E. Stoddard founded Finial Technology with $7 million in venture capital. A year later servo-control expert Robert N. Stark joined the effort. A non-functioning mock-up of the optical turntable was shown at the 1984 Consumer Electronics Show (CES), generating much interest and a fair amount of mystery, since the patents had not yet been granted and the details had to be kept secret. The first working model, the Finial LT-1, was completed two years later and presented at the 1986 CES. The prototype had an interesting flaw: it was so accurate that it played every particle of dirt and dust on the record, rather than pushing them aside as a conventional stylus would. The projected $2500 street price (raised to $3786 in 1988) limited the potential market to serious well-heeled audiophiles.

Unfortunately for Finial, its project coincided with the introduction of the Digital Compact Disc, which began flooding the market at prices comparable to LPs (with CD players in the $300 range). Vinyl record sales plummeted, and many turntable manufacturers failed as a result.

The Finial turntable never went into mass production. Tooling delays, component unavailability (in the days before cheap lasers), marketing blunders, and high development costs prevented it. With over US$20 million in venture capital invested, Finial was faced with a Morton's fork: to forge ahead with a selling price that was too high for most consumers, or to gamble on going into mass production at a much lower price at the very moment the bottom was dropping out of the market and the economy was in recession. In late 1989 Finial's investors finally succumbed to their unfortunate timing and liquidated the firm, selling the patents to Japanese turntable maker, which became CTI Japan which in turn created ELP Japan for continued development of the "super-audiophile" turntable. It was finally put on sale in 1997 as the ELP LT-1XA Laser Turntable, with a list price of US$20,500 prices start at US$10,000). The device was marketed especially as a tool for professional customers such as radio stations that wished to digitize their vinyl stock during the transition to an all-digital environment.

The US Library of Congress and other US agencies are sponsoring projects to develop two-dimensional (IRENE) and three-dimensional scanners to recover audio information from mechanical recordings. These are bespoke machines intended to recover historical recordings, rather than intended commercial products.